Ministry to the hopeless began in a CIU class 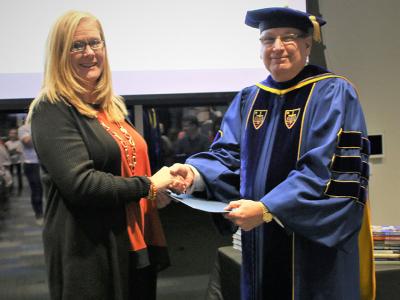 Patricia England says the Columbia International University Diploma in Women’s Leadership “takes you to another level.”

England is among those who graduated from the program’s inaugural class in 2019 and credits the program with helping her move forward in her new ministry to incarcerated females in the Lexington County, South Carolina jail — a place where she spent a lot of time in trouble with the law when she was young.

“One of the things I remember the most is pictures I had of me when I was 16. There was no hope in my eyes. There was no hope,” England stressed in a phone interview. “I don’t know any better words for it, but hopeless.”

England has been in federal prison twice, but honestly can’t remember how many times she has been in and out of county jails. Her convictions included various drug charges and prostitution. In 2014, England was about to commit suicide with a razor in the jail shower. But before the shower, a fellow inmate shared a Bible verse that changed everything.

“Live was in bold letters,” England recalled. “Getting in that shower I wanted to (commit suicide), but God just told me to live. I surrendered.”

From England’s jail experiences, Hadassah Hope Ministries was born. Hadassah is the Hebrew name of the Old Testament’s Queen Esther. England teaches biblically-based life skills to the women at the jail and is about to publish a workbook to assist them. It’s a compilation of her journey to freedom through Christ, and practical aids for women reentering society. She says the CIU Diploma in Women’s Leadership empowered her to found the nonprofit and write the workbook.

“I don’t think I would have ever tackled the workbook had it not been for CIU,” England said. “It taught me how to outline a devotional message and how to apply it … how to research … it empowered me with so much knowledge. It just takes you to another level in your relationship with Christ.”

England’s dream is to help women in seemingly hopeless situations discover the freedom in Christ she now knows, and open a halfway house for women after their incarceration.

Where will the Diploma in Women’s Leadership take you? Discover more and register today.