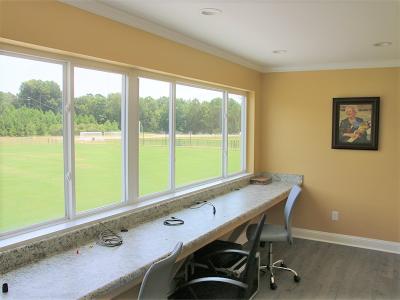 A new 22-foot press box at Sessions Field will streamline sports information and game operation for CIU soccer. It features a climate-controlled space with high-speed internet, scoreboard control console, sound system and, most importantly, a sweeping view of Sessions Field.

Funds for the press box were generously donated by the Sessions family in honor of the late Elizabeth Sessions whose contribution to the university made the construction of Sessions Field possible. Sessions graduated from CIU, then called Columbia Bible College, in 1943. She also served on CIU’s board of trustees for 17 years, and received several honors from CIU including Alumna of the Year in 1999 and an honorary doctorate in 2010.

The press box includes a photo of Sessions from November 2016 at the dedication of the field.

Learn more about this exciting addition to CIU athletics at the Rams website.