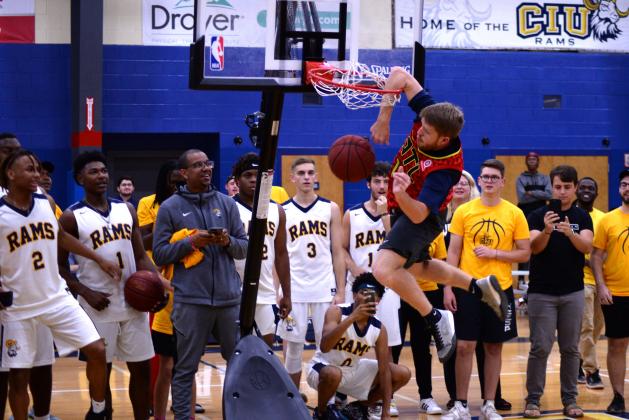 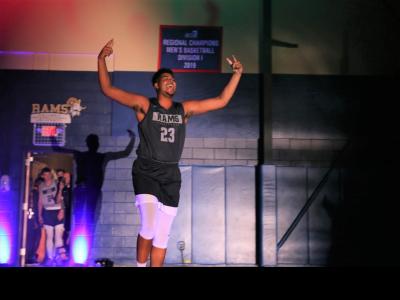 The Moore Fitness Center dazzled as the 2019-2020 basketball teams entered the court. Deafening screams of the athletes' student peers and faithful fans filled the gym throughout the night.

Moore Madness introduces the basketball teams, unifies the student body and promotes upcoming games, all while stirring up school spirit.

"I think the reason that I love Moore madness is because of the personality the event brings," said junior Jonathan Acosta. "It's not even about basketball, it's about the players doing something they love for the sake of doing it with a passion and a joy that you rarely see outside of this event."

Each basketball player received their own dramatic introduction. Many were so excited they started dancing and jumping their way to center court. After the individual introductions, the women's team, men's JV team, and men's team divided up and competed in 10 minute scrimmages. The basketball players weren't the only ones competing, however. All students were given a chance to participate in games and win prizes. Games included basketball-style musical chairs, a dunk competition for students and a half-court shot worth a $1,000 scholarship. But no one made the shot this year.

One of the most intense competitions at Moore Madness is the annual "CIU Dunk Competition" between members of the men’s basketball team. Tyrone Dantzler Jr. won for the third year in a row.

"I thank God for the opportunity to share my talent!" said Dantzer, a senior. "It's been such an honor to entertain the student body and be a part of athletics. I appreciate everyone who came out and supported our teams."

Reflecting on the memories and his last season before graduation, he added, "It's been a wonderful journey!"

Check out the Moore Madness video.

Columbia International University consistently ranks among the Top Regional Universities in the South by U.S. News & World Report. Excitement is growing on campus with CIU’s first baseball program in development and new academic programs such as the Doctor of Ministerial Leadership. Request information on enrollment at CIU and Columbia Biblical Seminary or call (800) 777-2227, ext. 5024