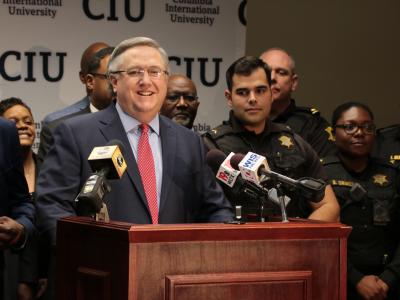 A partnership between Columbia International University and neighborhood leaders in North Columbia has reached a milestone that will transform blighted, crime-attracting properties on Monticello Road into commercially viable properties that will enhance the area’s appearance, reduce crime and attract significant economic activity.

CIU recently completed the last purchase of seven properties on Monticello Road from the I-20 exit along the gateway leading to the campus. Abandoned buildings have been demolished and cleanup of the sites has begun. The most recent purchase is a former club that was torn down.

At a news conference on the CIU campus, CIU President Dr. Mark A. Smith said he is already talking with a business owner who has expressed interest in the properties.

“While all the details need to be worked out … we have a handshake agreement on a business venture to bring jobs to the area and to begin to clean up Monticello Road,” Smith said to the applause of community leaders who joined him at the podium.

“We are so glad to see what God has done in a year’s time under the leadership of Dr. Smith and CIU, and we look forward to continuing our partnership, working on economic development and impacting families in these communities,” Melvin said.

The Richland County Sheriff’s Department has been discussing the location of additional resources to the area and has indicated that a major reduction in crime should occur with the cleanup of these properties.

It’s not often that law enforcement gets to stand at a podium and talk about exciting things —revitalization, reclaiming communities,” said Richland County Sheriff’s Department Deputy Chief Chris Cowan. “Public Safety is excited about what’s going on at Monticello Road because of the dramatic change that will take place because of the input and generosity of Columbia International University.”

Smith and other partnership representatives are meeting with local government officials to direct resources to Monticello Road and are seeking support for a variety of grants. Richland County Councilman Paul Livingston is working hard to assist this area.

Two of their priorities are additional lighting along the Monticello Road corridor and additional law enforcement presence.

CIU is also poised to meet business and IT needs with the new William H. Jones Global Business & IT Center scheduled for completion this fall. One of the purposes of the Center is to provide a corporate training room for Columbia area business professionals to act as a catalyst for business development, especially along the Monticello Road corridor. It will also provide an opportunity for CIU students to advance their “revitalizing” skills in business in the United States or in international missions work.

The building alone will add a beautiful corporate touch to Monticello Road.

“We have a strong core value at CIU that we are to give back to our local community,” Smith said. “As we take Christ to the nations, we must first start here at home. As president I commit to invest locally and be a part of our community.”

Read more coverage of the news conference in the Columbia Regional Business Report and in The State newspaper. See TV coverage on WIS TV and ABC Columbia.