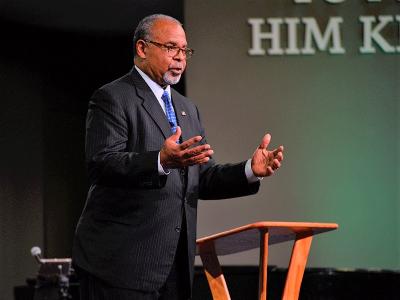 Ken Blackwell, a nationally-known figure with an extensive career in public service has been named to the Columbia International University Board of Trustees.

Blackwell has served as mayor of Cincinnati and Ohio treasurer and secretary of state. Additionally, he was undersecretary at the U.S. Department of Housing and Urban Development, and U.S. Ambassador to the United Nations Human Rights Commission.

Currently, Blackwell is the senior fellow for Human Rights and Constitutional Governance at the Family Research Council in Washington, D.C. He also serves on the board of directors of a number of national organizations including the International Foundation for Electoral Systems, the United States Air Force Academy Foundation and the National World War II Museum. He is a member of the Council on Foreign Relations and the Board of Advisors of the Jewish Institute for National Security Affairs (JINSA).

Blackwell has received many honors for his work in the public sector including the U.S. Department of State’s Superior Honor Award in the field of human rights. He has had commentaries published in major media outlets including The Wall Street Journal, USA Today and The New York Times. He has been interviewed by CBS’s Face the Nation, NBC’s Meet the Press, ABC’s This Week, and Fox News Sunday.

Blackwell holds Bachelor of Science and Master of Education degrees from Xavier University in Ohio, where he later served as a vice president and member of its faculty. In 1992, he received Xavier’s Distinguished Alumnus Award. Blackwell has also received honorary doctoral degrees from 10 institutions of higher education.