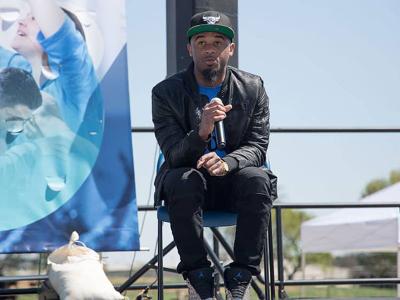 An alumnus of the Columbia International University Prison Initiative is making his mark as a Christian rapper, designs his own clothing line, and works for an HVAC company.

Jeff Walker, who grew up in what he describes as a “rough” neighborhood in Columbia, South Carolina, would find himself in a state prison in the same city by the time he was 18. But while behind bars, came a message, “Only God can save you now.”

With the help of the national ministry Prison Fellowship, Walker became a follower of Christ, was discipled in his new faith, and developed his musical talents.

Also while in prison, Jeff enrolled in the CIU Prison Initiative which equips qualified inmates through an accredited Associate of Arts degree, to reach fellow inmates with the message of Christ. After graduation, alumni of the CIU Prison Initiative are assigned as chaplain’s assistants at correctional facilities around the state. Jeff graduated in 2011 with a 4.0 Grade Point Average. He was released from prison in 2019.

The CIU Prison Initiative is supported by donors. Learn how you can make a gift.