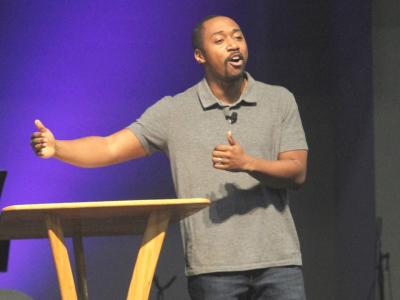 “Rejoicing in Unification” was the theme of CIU’s Black History Month celebration. Chapel speakers for the week also focused on the CIU core value of Evangelical Unity.

Opening the week was Antony Frederick, an up-and-coming leader in racial reconciliation and a minister at Midtown Fellowship in Columbia. His message was “When Lamentation Precedes Unification.”

Frederick challenged the students to lament racial strife in the history of the church in America, saying that before one can rejoice in unification, there needs to be a time of lamentation. Lamentation, he preached, means recognizing situations for what they really are; true love demands that we lament. He said Jesus has a heart for those oppressed in society, and Christians should long for heart like that as well.

Students also heard from Darryl Gaddy, a church strategist with the Santee Baptist Association in South Carolina. Gaddy, called on students to love those around them with intense enthusiasm. He not only called for racial reconciliation and action, but spiritual awakening.

On Valentine’s Day, Minister Napoleon Bradford of Sumter, South Carolina took the occasion to talk about the characteristics of real love. Preaching from Mark 2 where the friends of a paralytic tore through a roof to get the man to Jesus for healing, Bradford used the phrase “I love you too much to leave you lame” saying we need to love others enough to find a solution to their pain.

“It was a great experience to serve God with others and to also grow more in God’s word and sing praises to God as well,” Rogers said.

Other events during the week included a Trivia Night conducted in Jeopardy style, donuts on Valentine’s Day, and the showing of the move Hidden Figures — the story the important role three African-American women played in the history of the United States space program.