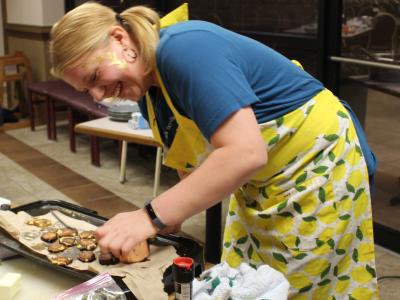 By Naomi Balk and Ireland Kost

The Shofar Cup is a part of The House Collective that includes year-round social events, service projects, small groups and house competitions where house members compete to win points to earn the title of House Victors.

Every student is assigned to one of six houses: Fidelitas, Dignitas and Veritas for the women; Virtus, Justitia, and Sapientia for the men. Each house has its unique identity, traditions, colors and crest.

"I thought the week of the Shofar Cup was a time of fellowship within the houses and an (opportunity) to give the best that they all could do for the week of competition events," said freshmen Tyler Marshall.

Monday began the competitive mood of the week with a 3 km adventure race interspersed with six obstacles. Marshall, one of the four racers representing Sapientia said, "Participating in the adventure race for my house was exhausting, fun, and worth it.”

Encouraging cheers for each house echoed through campus as racers dashed from the starting point at The Quad through the wooded campus trails, over the CIU Lake on paddleboards, and back to The Quad.

The cook-off on Tuesday transformed the cafeteria to CIU’s own Top Chef or MasterChef where a duo of cooks from each house prepared an appetizer, an entree and dessert.

“It’s a really neat event! I love cooking and think that people bond over food,” freshman Katelyn Nichols from Veritas said. “I really like how it helps reveal people’s talent and creativity you didn’t know that they had. It’s a welcoming environment.”

Everyone held their breath as the judges tasted the dishes and awarded points.

The event on Wednesday evening was a trivia bowl. Questions were asked, timers buzzed and answers flew.

On Thursday, junior Will Beers described artwork in the coffee house as “windows into people’s life.”

Beers reflected, “I appreciate the community aspect and I think it is a good picture of what CIU should be. It gives the preview students a good (representation) of the flavor of CIU.”

Friday featured a Super Smash Bros. tournament in Hoke Auditorium with several TV monitors lighting up the action. Sophomore Jevon Hilton said he was glad to see a number of the CIU women play a video game that often only brings out the guys.

After the final act, Director of Residence Life, Ethan Young, came to the stage, “So are you guys interested in knowing who won the Shofar Cup?” he asked the student body. The entire room drowned him out in cheers. “In first place with 1,820 points, winners of the Shofar Cup: Fidelitas!”

The women of Fedelitas or “Faithfulness,” erupted into cheers, ecstatic at their win.

Bailey Warren, a junior, who is a campus life coordinator for Fidelitas, said the women of her house worked hard to earn the Shofar Cup.

“It was awesome seeing their hard work pay off,” Warren said. “Each house performed so well throughout the entire week, and I’m thankful for the opportunity to practice healthy competition in my community.”