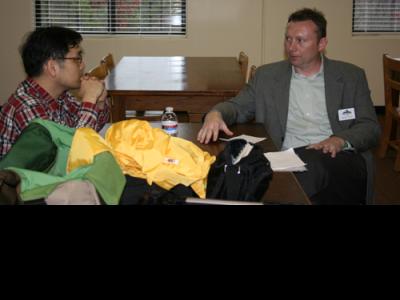 A South Korean television production company conducted nine interviews during a full day of video shooting on the campus of Columbia International University as part of a documentary on Christian primary and secondary schooling.

South Korean TV Producer Byeong Seon Han was accompanied by her cameraman and translator as she spoke with administrators, teachers, students and staff at Columbia International University and Ben Lippen School on Feb. 4.  Christian schools are growing in South Korea and Byeong is curious about the success of Ben Lippen School, and its relationship with Columbia International University.

CIU is unique in its offering of master and doctoral programs that focus on the administration of Christian schools, which is put into practice at Ben Lippen, CIU’s Pre-K to 12 grade ministry.

For more information on CIU’s College of Education visit: /graduate