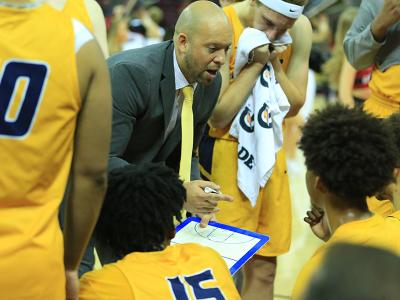 Columbia International University Head Men’s Basketball Coach Tony Stockman is the National Christian College Athletic Association (NCCAA) South Region Coach of the Year after leading the Rams to a South Region championship for the second year in a row.

Stockman also led the Rams to their first 20-win season in program history. The Rams record against NCCAA opponents was 5-1 this season.

Stockman says he is very thankful for the Coach of the Year honor.

“The perception of a coach is based off his players, and our players did a great job of making me look good this year,” Stockman said, adding that assistant coaches Cory Inman and Rico Hall also deserve credit.

“The head coach is often the one who receives the recognition, but it takes more than just one person to make a program successful. I am very thankful for the people that surround me and make my job fun and rewarding."

Meanwhile, senior Jeff McIlwain is the NCCAA South Region Player of the Year.

The Rams are also D-II members of the National Association of Intercollegiate Athletics (NAIA). Their record for conference play in the Appalachian Athletic Conference was 16-9.

Read more about the Rams success at the CIU Athletics website.

What’s your sport? Excitement is growing on the CIU campus with an expanding athletics program. Discover more at CIURams.com. Request information on enrollment or call (800) 777-2227, ext. 5024.