A summer of worldwide impact through athletics 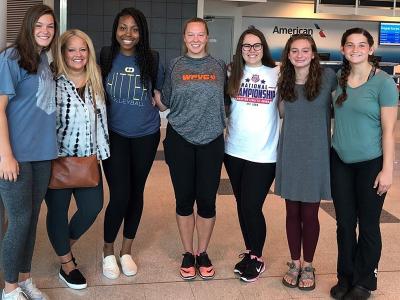 Columbia International University softball, volleyball and women’s soccer made an impact with the message of Christ in three different parts of the world over the summer as they teamed-up with local sports ministries and missionaries.

Softball Coach Sara Allen and members of her team were in the Middle East for two weeks holding clinics for about 75 youth, women and men, many of whom play on their national teams.

“It was really eye-opening to experience how important it is, especially in Middle Eastern culture, to build genuine relationships with people and to let our stories with Christ flow naturally into those relationships,” Allen said. “We had incredibly deep and fruitful conversations with many of the softball players we worked with, and were able to share the gospel after one practice toward the end of our trip as a result of the great energy we had established on the field.”

Women’s Soccer Coach Kara Farnsworth was on a ministry trip to Asia supporting and encouraging a missionary family in a nation where persecution of the church has increased. But Farnsworth says the door was open for her to play soccer and spend time with the local residents opening the door for the missionaries to “build relationships and share the love of Christ.”

While Farnsworth does not speak the local language, she says, “we were able to communicate with one another through playing the game we both love. There is an understanding of one another through the game where we learn more about each other’s preferences and how we face success and failure.”

Meanwhile, Volleyball Coach Amber Haver and five members of her team were in the Catalonia region of Spain assisting at a sports camp, when a camper made a comment about Americans having a lot of power. Haver asked her to clarify what she meant. Through broken English the camper explained that the CIU team is always smiling and happy. Haver paused for just a second and explained it’s not an American thing, but that the joy comes from Jesus and the team’s faith in Him.

“She allowed us to pray with her and for her,” Haver said. “This is huge, because as we learned in training, the Catalan people are very resistant to prayer and anything having to do with God or religion.”

You can also read about how Baseball Coach Jonathan Johnson made an impact over the summer through his Honoring the Father Ministry.

Want to learn to minister through your sport? Discover more at rams.com including CIU’s first baseball program.