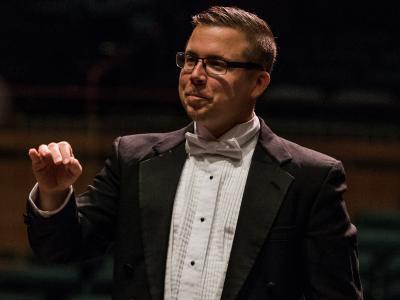 A new 100-voice Ambassador Choir is in development at Columbia International University led by a talented and experienced chorale director.

Bryce Thompson comes to CIU from Lake Orion High School in Lake Orion, Michigan where he built a choir program that emphasizes music literacy and high-level musicianship. His choirs have performed before large audiences in churches and cathedrals. They also performed the National Anthem before a Detroit Tigers baseball game and provided the halftime entertainment for the NBA’s Detroit Pistons.

CIU President Dr. Mark Smith says he has been praying for this day.

“Bryce will be building a choir presence that will represent CIU on national as well as international tours,” Smith said. “This will increase the quality of our music program, enrollment and spiritual impact.”

Thompson has nearly a dozen years of experience directing, conducting and teaching music at the high school, middle school and grade school level. He received one-on-one training from Dr. Todd Guy, the choral director at Indiana Wesleyan University where he earned a Bachelor of Science degree in Music Education with an emphasis on choral and instrumental music. He earned a Master of Music in Choral Conducting from Michigan State University.

Thompson says he’s looking forward to being a part of the CIU family.

“My passion is to teach others how to pursue excellence in their own lives as an act of worship,” Thompson said. “I believe that the difference between average and excellence is detail and I bring that to every area of my life. I am excited to make Him known through our work together!”

A CIU donor has provided $1.5 million to build and market the Ambassador Choir over the next five years.

Columbia International University ranks #1 among colleges and universities in South Carolina by BestColleges.com. Excitement is growing on campus with CIU’s first baseball program in development and online with CIU’s new Ph.D. in Organizational Leadership. Request information on enrollment at CIU and Columbia Biblical Seminary or call (800) 777-2227, ext. 5024.