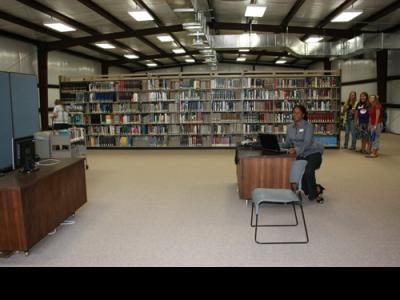 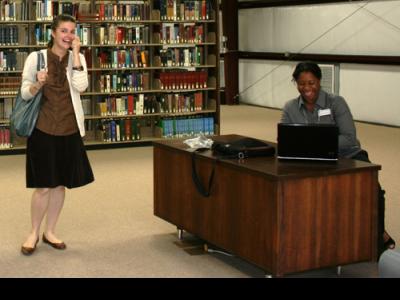 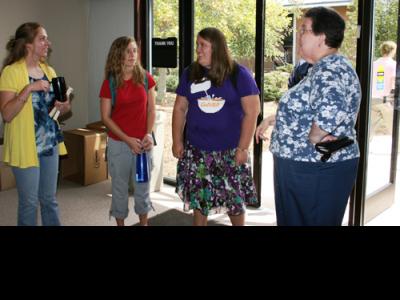 "As long as there's a reference section, I think most of us are just peachy."

That's what a student told Columbia International University Library Director Joanne Rhodes after touring the new temporary library at CIU. The temporary library opened on Sept. 9, four months after a fire caused major damage to CIU's G. Allen Fleece Library. The cause of the fire which happened one week before graduation was an electrical problem with a ceiling light. The initial estimate of damages was $2.5 million. But school officials say after further inspection, the cost of repairs will probably be higher.

Hard work over the summer made the metal-framed temporary facility available to students less than a month into the new school year. It's located just west of the Fleece library, behind Shortess Chapel.

"I missed the books," said student Elizabeth Gross, raising her hands as she entered and looked around. "I think students have an emotional bond to books," she added.

Rhodes says there are about 8,000 books in the temporary library including all of the 5,000 reference books that were salvaged from the Fleece library. Other books that are on the shelves include books that were checked out when the fire hit, newly purchased books, and donated books, including thousands donated by Philadelphia Biblical University. More books from the Philadelphia school will be added to the shelves as they are processed, and more books will be purchased. There are about six rows of empty shelves at the rear of the temporary library.

Other books that were salvaged from the Fleece Library are still being stored by a book salvage company in Atlanta, and Rhodes says they will probably remain there until there is a permanent library on campus.

As the exact plans for a permanent library are still being discussed by the CIU leadership, Rhodes is glad to have a place to call home.

"I think we all felt relieved," Rhodes said speaking for her staff. "It's such an unsettled feeling to not belong anyplace. I think it's good for all of my staff to feel like there's a place that is the library."

As Rhodes was discussing the library, her attention was abruptly interrupted by history. A student was at the circulation desk checking out the first book from the temporary library, the C.S. Lewis classic, "The Screwtape Letters."