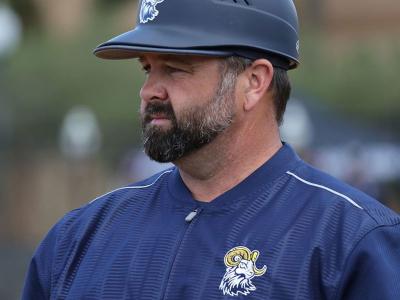 It’s been a great season for the Columbia International University Rams baseball squad, and that caught the attention of the National Christian College Athletic Association (NCCAA) who named Head Coach Jonathan Johnson the NCCAA South Region Coach of the Year.

Johnson led CIU to a 25-21 regular season, a No. 1 seed in the NCCAA South Region Tournament, and a No. 5 ranking in the final NCCAA Baseball Power Ratings. Outside the NCCAA, Coach Johnson's squad finished fifth in the Appalachian Athletic Conference (AAC) in their first full season of conference play. The Rams also defeated the NAIA's top team Tennessee Wesleyan twice.

Johnson said it’s an honor to be voted coach of the year by his peers, but pointed to his players who helped form a successful program in only two seasons.

“These guys took a chance coming to a school without a field and no program history,” Johnson said. “Now we have a gorgeous field, and they are establishing the CIU baseball culture and expectations for those that follow them in the future."

Meanwhile, the Rams also picked up the Region Player of the Year as junior catcher Joshua Hernandez grabbed that award. Hernandez led CIU in RBIs during the regular season with 53 while hitting .329. Hernandez became the first player in CIU history to reach double-digit home runs as he recorded 16 on the season and finished top five in the NCCAA in total homers.