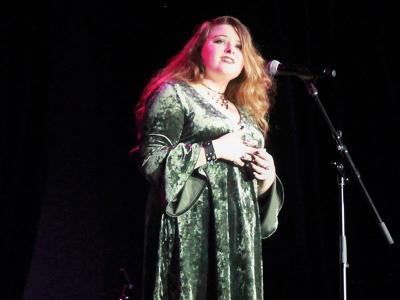 The 2021 edition of Columbia International University’s annual AcoustaRockaRappaPaloozaStockFest, better known as Acouta, was a red carpet event featuring some of the finest talent on campus.

With the student body dressed in formal and semi-formal wear, sparkling grape juice and popcorn in hand, the lights dimmed and the spotlight hit the stage on hosts Caleb “Choppy” Jung, a CIU alumnus, and freshman Olivia Humphrey. They introduced Sarah Causey known for her stage performances at CIU. In this, her final year on campus, she opened the night by performing a song from the hit musical “Waitress.”

Casey Malone and Aynsley Vivian performed a dramatic interpretation of the song “How Could You Leave Us” made popular by rapper NF. The performance emphasized the fact that someone commits suicide every 40 seconds. At the end of the act, the hosts asked for a moment of silent reflection to think about the impact of suicide on the world.

One of the most unusual and entertaining acts was performed by CIU alumnus Michael Lanier who brought a Theremin up on stage. The Theremin is an electronic box with radio tubes producing oscillations controlled without physical contact. He was accompanied by Renee Laine on the piano as they played “Over the Rainbow.”

Many students wrote original songs for the night. If there was a common theme among them, it would be God’s steadfastness through times of doubt and difficulty.

Ariel Ray, Madison Medlin, Katelyn Nichols and Katie Mayberry were some of the crowd favorites. Their work encouraged the student body to deepen their trust in God.

Tyler Tong, assistant dean of Student Services called the night “a lot of fun” especially after the annual event was cancelled last year as students were learning virtually because of COVID.

“This year was interesting because we had a chance to reset,” Tong said. “We didn't have (Acousta) last year and so we really tried to kick it up a notch which I think just made for a high- class event. It's really great for us to showcase student talents. It's one of my favorite events.”