Welcome to Owen’s Place: A Fun Spot to Kick Back 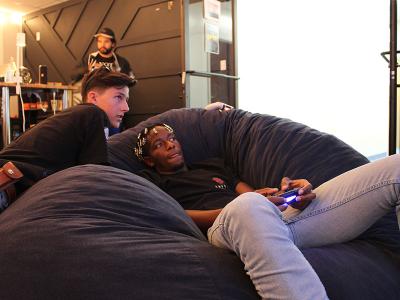 Now here is a place to relax.

Owen’s Place, located in the Rossi Student Center, has plenty of video games, snacks and beanbags, in an ambiance of dim lights and recorded music. It’s also a center for planning and facilitating campus events.

The new room started as an idea when Assistant Dean for Student Services Tyler Tong and his team were looking for ways to improve student life. In September 2020, they were able to get things moving, and had the room ready by November.

“One of the good things that came from COVID was ending the (on-campus spring 2020) semester early,” Tong said. “Which means we had excess funds from student activities and such to be able to afford remodeling.”

Chandler Carlisle, a student who works in Owen’s Place, wanted a campus job where he could interact with people. He got what he asked for and more.

“I thought it’d be kind of fun to have a room where you can just hang out with people, talk to folks and plan events on campus,” Carlisle said.

He described his experience as great, but noted, “COVID has kind of messed us up in some ways. It took us a little longer to open, (and delayed) some of the events we wanted to put on. But overall, it’s been a really good experience and I’ve enjoyed it.”

CIU students appreciate a place to kick back.

“I go to Owen’s place to relieve some stress,” said freshman Malik Beaver. “There’s video games, the lighting is good and they’ve got beanbags. It’s just a place to relax. They’ve got friendly people there so you just want to go down there and chill and listen to people, play games and relax. That’s the place to be.”

Tong says the students like it so much it’s difficult to get them to leave.

“There are always students in there pretty much from the time we open till we’re kicking people out at the end of the night. We’ve added some new games and continue to add things.”

Some of the popular games include Mario Kart and Super Smash Bros.

Beaver noted that there’s a big difference between Owen’s and gaming in his own room where he has three consoles.

Tong is always looking for ways to improve Owen’s Place, and next school year students will have some exciting upgrades to look forward to.

“Next year, we’re going to be more intentional about additional programming, tournaments, some outdoor recreational stuff that people can borrow and more,” Tong said.

And who is Owen? A fish.

Tong has a large fish tank in his office. Unfortunately, one of them went on to be in Fish Heaven. That fish’s name … Owen. The room was named in honor of Tong’s late aquatic friend.