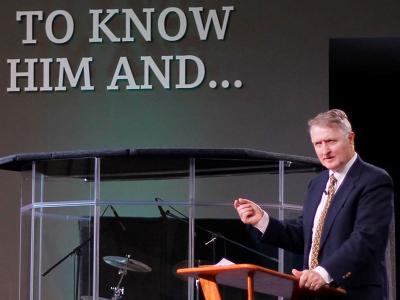 Copan, who graduated from CIU in 1984 with a Bachelor of Arts in Biblical Studies, is today a professor at Palm Beach Atlantic University where he holds the endowed Pledger Family Chair of Philosophy and Ethics. As he addressed the CIU student body in a Chapel service and an evening lecture, he was introduced by Dr. Johnathan Reibsamen, director of the CIU Philosophy Program who noted, “he has sat where you have sat.”

In Chapel, Copan spoke on the ethics of sexuality and how Christians are to respond to a growing climate that dislikes the traditional view of marriage being between one man and one woman.

But at the outset he stated: “In case you don’t know it, all of us are broken in some areas.” He reminded the students that before they listen to his lecture with their presuppositions, repair work needs to be done on all of us.

Copan addressed common approaches to witnessing to homosexuals that he says don’t work. Instead, he said Christians should offer a listening ear without judging, and at the same time, not approving of sinful choices. He said this would lead to a better understanding so that in a Christlike manner, we may help people come away from their sinful desires.

In his evening lecture, Copan presented the “Roots and Fruits of Progressivism.” He gave examples of the traits behind Progressivism thought leaders saying a common factor between Marx, Stalin, and Hitler, was their dislike of the family structure, their desire for the people’s dependency on the state, and the abolishment of private property.

Copan discussed the benefits of capitalism in comparison to socialism, pointing out that while both systems can have problems, capitalism statistically provides for more people to escape from poverty.

“He covered the main topics of Progressivism and discussed the roots which are the people who founded it,” said Philosophy major Chandler Carlisle. “They are the ones who really started implementing it into society.”

Copan is the author of 16 books including “An Introduction to Biblical Ethics” which he co-authored with the late CIU President Robertson McQuilkin.