The women of CIU softball are Champions of Character 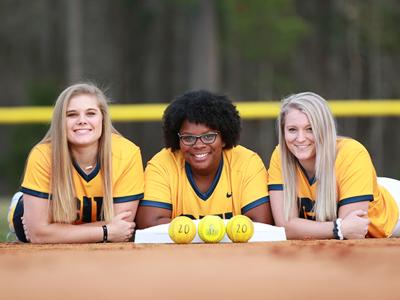 “No matter the score on the board or the outcome of the game, CIU never falters in who they are and what they stand for and I believe that it is a very admirable thing.”

That is a quote from Jenni Shepard, the athletic director and head softball coach of Truett McConnell University in Cleveland, Georgia, who nominated the CIU Rams women’s softball team for the Appalachian Athletic Conference Champions of Character Women’s Team Award.

Shepard is impressed with CIU’s display of sportsmanship. She noted that when the games are over, CIU athletes greet members of the opposing team to give them a note with Scripture on it along with an encouraging message. Then, the teams meet for a short devotional thought and prayer.

CIU Women’s Softball Head Coach Sara Allen says the award is ironic because the team chose the word, “contagious” as the motto for the season.

“They wanted to have a tangible energy, passion, and love for the game, each other and Jesus, that couldn't help but be caught by the other team, no matter what the score was,” Allen said. “They also wanted to have a competitive fire that challenged our opponents to play their best softball in order to beat us.”

The Rams are now eligible for the NAIA's Conference Commissioners Association (CCA) Champions of Character Team Award, given annually to one men's and one women's team for their exemplary character on the field, on campus, and in the community.

Read more about the award at the CIU Athletics website.

What’s your sport? Excitement is growing on the CIU campus with an expanding athletics program. Discover more at CIURams.com. Request information on enrollment or call (800) 777-2227, ext. 5024.