Pastor Travis Greene of Forward City Church says that every church service should be a celebration that is full of energy. That’s why there’s a DJ in the lobby of Forward City, bells are rung announcing first-time visitors, and the host on the shuttle buses shouts, “Hey, are you ready for church?”

“There is excitement, there are smiles,” says Greene. “The energy is everywhere. It is contagious.”

Greene, who earned this master’s degree in Theological Studies online from CIU in 2020, founded the 2,000-member church in Columbia, South Carolina in 2016. Its location moved a number of times before renovating a former Best Buy into a state-of-the-art facility.

Energetic is also the way Green describes what he is known for worldwide — his music. He is a singer, songwriter and producer who has had five Grammy nominations. Perhaps his most popular song is “Made a Way,” which he wrote in 2014 after the premature birth of Marcel, the first of his three children. It followed a difficult pregnancy for his wife and co-pastor, Jackie. The song begins:

Today, Marcel, is a healthy eight-year-old who “loves, loves, loves people,” Greene said, adding, “I think maybe gets that from both of his parents.“

After attending church since he was a child, Greene says he was not finding what he needed in the “institutional church.” So, when he planted Forward City Church, he says he was following the Lord’s leading to “create the place where you’d like to be.”

Greene says many of the churches he attended over the years either had a very strong theological base in the presentation of the Word of God, but he “tolerated” the worship music because “it wasn’t the most energetic, it wasn’t the most enjoyable.” Or at other churches he says “the music was just amazing,” but he would question the doctrinal accuracy of what was being preached.

He says at Forward City Church they strive for “worship that will take you to a place where you can receive insight and inspiration through the worship experience” while at the same time you don’t have to “settle for the preached Word that is not theologically sound.”

“The worship experience is going to be energetic, and the message is going to be one that you can comprehend, infused with humor, and truth and grace and relevance,” Greene explained. “You get to see yourself in the Scripture, but also through that be able to see God in a new and profound way.”

And when it comes to children’s ministry, Greene says Forward City has the largest indoor playground in the region, but more importantly, the children are learning the Bible. Noting that his own son was able to quote every book in the Bible at age two.

“Our kids are learning Scripture, they are learning about God,” Greene said. “The experience is interactive. People dress up as Bible characters and do reenactments. It’s a church that we all wish we went to as a child,” Greene says with a laugh.

As for his CIU experience, Greene’s degree was earned completely online. He even took classes and wrote papers while travelling through Africa on a concert tour.

“My professors were so gracious, especially once I informed them of all I did and what tours I was on,” Greene said. “It was a great experience. I learned tons. I love the mission of CIU. It helped expand my heart toward outreach, in-reach, and sharing the gospel with people no matter where they are in life and that’s what CIU is all about.” 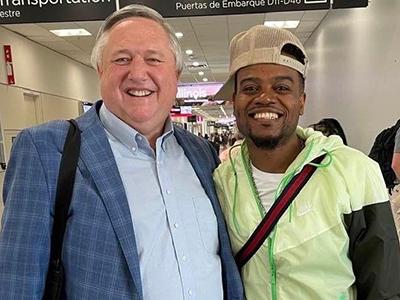