I like to chat with the parents of in-coming CIU freshmen on move-in day. I especially like to ask where they are from. It’s not unusual that sometimes the family is from right here in Columbia. But I was taken aback this year when a mother said she is from Columbia and added:

“A graduate student?” I asked.

“No, I’m actually an undergraduate student.”

That’s right. Nikia Patterson, a military veteran, is a transfer student in her senior year working on a degree in Human Services. She was carrying boxes into the dorm room of her daughter, and fellow undergraduate student, Jalisa Likely, a Digital Media & Cinema major.

Mom added to my surprise with, “We have the first two classes together, Monday, Wednesday and Friday.”

At this point, I’m laughing along with mom and thinking, “What are the odds?”

“I told her to sit way on the other side of class,” added mom. “Don’t sit next to me,” she laughed.

So, what does daughter think of being in the same classes with mom?

“I can never be late for class because she’s going to call me and say, ‘Where are you?’” said Jalisa, “So, I can’t be late.”

More laughter between the three of us.

“I always do things with her anyway, so why not do school with her?” added Jalisa.

“This is a wonderful school. This is a great school that I encouraged my daughter to come to,” added mom. “I love it and hoping she will too.” 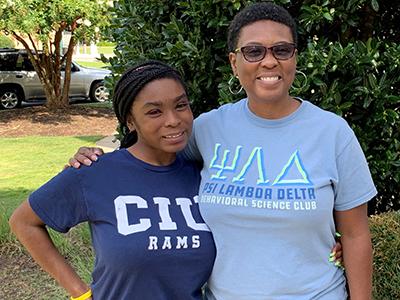