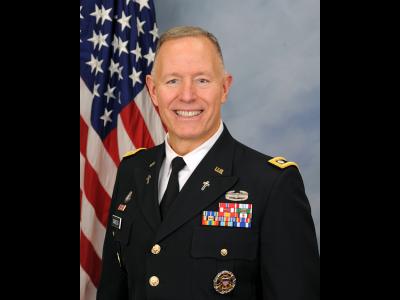 CIU alumnus “taking care of those who take care of soldiers”

Army Chaplain Larry Dabeck saw the Iraqi rocket fire whizz just over his head and hit the next group of U.S. soldiers beside him. As he made his way to minister to the 14 seriously wounded men, he discovered among them was Staff Sgt. Roger Turner, a fellow Christian he knew well.

“Sgt. Turner was mortally wounded and was dying in my arms while I held him and prayed for him,” Dabeck said. “I got to be with him as he was passing from this life to join the Lord. That is one of the greatest privileges of my life to be there with my brother as he was dying.”

To minister to others in the middle of a war was far from Dabeck’s mind as he received his Master of Divinity degree from Columbia International University in 1996. He joined the Army at age 37 after God closed the door to the more traditional mission field. On the suggestion of his brother-in-law, an Army helicopter pilot, Dabeck explored military chaplaincy.

“A year later I was signing into my first duty station as a tank battalion chaplain in the year 2000,” Dabeck recalled. “It was really interesting as we talked to people at CIU and my pastor, it really became obvious this was how God was leading and how everything my wife and I had been doing up to that point was not for the mission field, but was for this ministry, and God just keeps confirming that every step of the way.”

From Front Lines to the Pentagon

Since June 2016, God has seen fit to use Dabeck in an even more influential way. He is Lt. Col. Dabeck and deputy joint staff chaplain, the number two chaplain for the Joint Chiefs of Staff at the Pentagon, supporting about 3,000 military chaplains who are serving one million active duty service members.

“There are only two chaplains that serve the Chairman of The Joint Chiefs, that’s me and my boss” Dabeck explained in a phone interview from his office at The Pentagon “That makes me the action officer for all religious matters on the Joint staff.”

Dabeck had what he calls “a pretty cool job” serving in another joint position as senior chaplain in Afghanistan for all U.S. and NATO special operations, when he got the call to move to Washington.

“I was pretty excited and felt privileged that our chief of chaplains' office assigned me to take this position,” Dabeck said.

And even though he now has a desk job far from battle lines, personal ministry continues. Sometimes that includes performing weddings or delivering an invocation at a promotion or retirement ceremony.

“Almost every other day, I have a Joint Staff officer come in for counseling about their marriage, about their career or their family.” Dabeck adds.

At a time when the United States is culturally more secular, Dabeck says the chaplain is still an honored and important person to the men and women in uniform. He says he is respected and greeted by those he meets as he walks the halls of the Pentagon with a silver cross pinned to his shirt.

“Every day when I put on this uniform, I’m reminded that I serve a living Savior,” Dabeck said. “Service members love their chaplains because they know we take care of them, we take care of their families, and we’re with them every step of the way no matter where they go.”

Dabeck says the education and spiritual formation that he received at CIU prepared him for his responsibilities at the Pentagon.

And that is something Dabeck passed along to others. Not only did Dabeck earn his bachelor’s and seminary degree at CIU, he served as CIU director of recruitment from 1990-2000, a job he apparently did well even at home. His son John is a CIU sophomore in the Five Year Master of Divinity program.

“I would tell prospective students your walk with Christ is central and essential,” Dabeck said. “There is no substitute. My son reaffirms that is still the spirit of the school – the vitality of your relationship with Jesus Christ.

“The professors genuinely lived that out each day,” Dabeck continued, his voice rising with excitement. “That’s what I loved most. The professors loved the Lord and they set the environment for the rest of us as students, to follow them as they follow Christ.”

Center of God’s Will

Just like his professors, Dabeck is also leaving a godly impression on others. In the summer of 2015, one of his former commanders, Col. David Snodgrass, passed away un-expectantly at age 49. While Snodgrass and Dabeck were close friends, Dabeck didn’t know that Snodgrass’ military records directed that Dabeck perform his friend’s funeral in Tennessee, and his interment at Arlington National Cemetery.

“That’s the great part about this job is being used by the Lord to take care of His people, from before deployment to after deployment to the end of their career,” Dabeck concluded.

“I love it. I absolutely love it. This is what God had been preparing our family for all along. It’s a delight to be in the center of God’s will.”

Discover where a Master of Divinity in Chaplaincy may take you. Contact CIU at admissions@ciu.edu or (800) 777-2227.