CIU Thespians Present “The Lion, the Witch, and the Wardrobe” 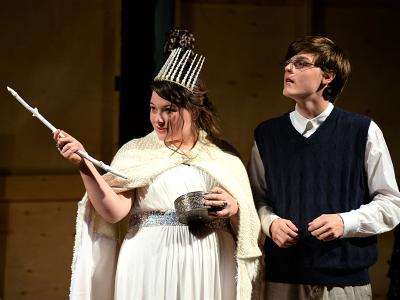 Mysterious fawns, falling snowflakes, and sword combat take to the stage in Hoke Auditorium as the CIU Thespians present C. S. Lewis' classic fantasy tale, "The Lion, the Witch, and the Wardrobe."

This is the first time the production will be performed at CIU, and the story is a favorite among many CIU Students. The themes of redemption, grace, and sanctification are woven in the pages of the script. At first glance, a story about sparkling unicorns, talking beavers, and majestic lions is soon seen to be an allegory for the believer's journey with Christ. The perils of this world, and the hope of living with the Lamb of God in the next one, are paralleled on the stage.

Ian Christianson, a CIU sophomore and missionary kid from Haiti, is playing the challenging role of Edmund Pevensie, one of the four children who wanderers from the human world into the magical land of Narnia. Edmund's character experiences in-depth character development as the show progresses. The audience watches as he begins transforming from a bitter, resentful rebel to a dedicated, determined warrior.

Christianson says Edmund is, in a sense, Lewis' allegory to sinful man.

“We all are deserving of death, and we're all saved through the blood of Jesus Christ, or Aslan in this case,” Christianson said. “It's really exciting for me to be able to play Edmund. I hope to do the role justice, but I've found as I've been playing him to be deserving of death, and Aslan's willing sacrifice made Jesus' sacrifice on the cross so much more real and poignant to me.”

Senior Sarah Causey from Myrtle Beach, South Carolina portrays the antagonist in the production, The White Witch. She has never portrayed a villain before, so she has found the role, “an interesting challenge."

"What I find fascinating about her is that she is basically ruled by fear,” Causey said. “Oh, she might be kind to you for a while ... but all too soon, the facade will fall, and you'll find yourself caught in her web with little chance of escape. Contrast this with Aslan, who rules by nobility and love. The two could not be more potent foils.”

Causey added that playing this role could make you look in the mirror and ask, "Whose army am I a part of? Am I being ruled by fear or by love?"

Director Noah Brown noted that one cast member never truly understood the gospel message until she read it in this story as a child.

“So I know that God has used this story before and I hope that he will do so again,” Brown said.

Ready to see the show? "The Lion, the Witch, and the Wardrobe" runs Nov. 15-17 in CIU’s Hoke Auditorium. The Friday and Saturday shows start at 7 p.m., and the Sunday Matinee show begins at 3 p.m. This family-friendly event is affordable too! Tickets are only $5 for adults, $3 for students, and $1 for children.

Wander through the wardrobe and meet the Pevensie children, Aslan, and all the classic characters of C. S. Lewis' story.