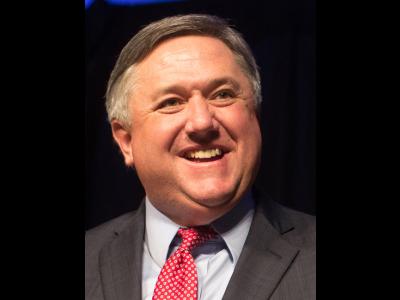 An experienced and respected Christian higher education administrator has been named the seventh president of Columbia International University. The announcement was made following a vote by the CIU Board of Trustees on February 2 to confirm Dr. Mark A. Smith as president beginning July 1, 2017.

Dr. Smith comes to CIU from Ohio Christian University (OCU) where he served as president for 11 years, increasing enrollment from approximately 400 to 4,600 students during his tenure. In addition, under Smith the university opened 14 sites in rural areas for student learning and began offering online educational programs. Smith also directed $30 million in capital construction projects and the increase of university personnel from approximately 50 to 800 employees.

Prior to coming to OCU, Smith served as vice president for adult and graduate studies at Indiana Wesleyan University where he oversaw the doubling of enrollment from approximately 5,000 to 10,000 students in four years.

Smith succeeds Dr. Bill Jones who suggested to the CIU Board of Trustees that Smith be considered for president. At each board meeting for the past seven years, the board has requested Jones submit the names of potential candidates in case something ever happened to him. Jones says when he turned 60 years old, 18 months ago, he began to pray more intensely about who one day would replace him as president. Not long after that, he had a providential conversation with Smith at a conference the two were attending. Smith had a simple question: “Would there be a role for me to play at CIU?”

“Over the next few months, Dr. Smith and I continued our conversation,” Jones said. “Right away, I made an entry in my prayer book to pray over the opportunity on a regular basis.”

At the May 2016 board meeting, Smith’s name was introduced to the Executive Committee by Jones. CIU Board Chairman Doug Rutt says it was the board’s “love and appreciation for Dr. Jones, as well as his leadership that caused us to be interested in learning more about Dr. Smith.”

By the end of October, more CIU leadership was brought into the discussion and after Christmas, Smith visited CIU to meet key board members, administrators and faculty leaders. After many conversations and much prayer, Rutt and the board agreed to pursue the possibility of Smith as CIU’s next president.

“As the Executive Committee interviewed Dr. Smith, and then as the entire board interviewed him, there was a very strong sense among us that God was providing a man who loves what we love at CIU and is uniquely gifted and experienced in ways that would benefit our institution greatly while being in step with us missionally,” Rutt said.

Meanwhile, in God’s providence, Dr. George Murray announced he was retiring as chancellor. The board and Smith asked Jones if he would serve alongside the president as chancellor for several years and continue the tremendous progress that God has given CIU.

In late January, faculty, staff and students were asked to pray for the board’s decision, a process that was well received. Speaking for the board, Rutt told the CIU family: “We are as intent as ever to have a president who is committed to educate students from a biblical worldview to impact the nations with the message of Christ.”

Rutt also asks alumni and friends of CIU to “please join us in continued prayer for Dr. Smith and Dr. Jones, as well as the rest of the CIU faculty and staff, as we ask God’s guidance during this exciting time of transition.”