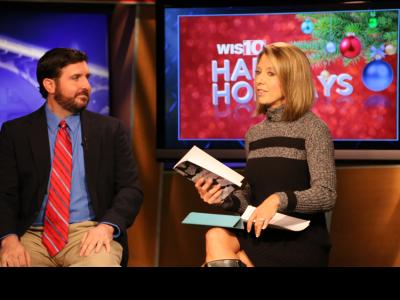 The annual Christmas pageant and the manger scene under the Christmas tree this season may not be biblically accurate. The Christmas pageant often includes an inn keeper who has no rooms to offer, directing Joseph and Mary to a stable out back. Meanwhile, under the tree, the figurines show Jesus now born and in a feeding trough of that lonely stable surrounded only by his parents.

While CIU professor of New Testament and Greek, Dr. David Croteau, says it’s reasonable to believe that Jesus was born in a stable, it is more likely Jesus was born in the house of a relative because a better translation of the word “inn” in Luke 2:7 is “guest room.”

“So rather than being turned away from a hotel and forced to a barn, it is likely Joseph and Mary were unable to stay in the guest room of a relative’s house,” Croteau explained. “And instead they were offered a section of the house where animals were brought in for the night and Jesus was placed in a manger or feeding trough carved into the floor.”

Croteau also says it is unlikely that Mary and Joseph hurried through the night and just barely made it to Bethlehem before Jesus was born as some movies portray. He points to Luke 2:6 that says, “And while they were there, the time came for her to give birth.”

“This is stated in such a way as to indicate that Mary and Joseph arrived in Bethlehem, found a place to stay, and then Mary gave birth,” Croteau said. “Luke 2:7 explains where they were staying. This makes it less plausible that Jesus was born in a stable because there was no urgency to the birth as described in Scripture.”

Croteau says Christmas carols such as “We Three Kings of Orient Are” can be misleading. He says the magi who visited Jesus were not kings, there is no solid evidence there were three of them, and strictly speaking, they were not from the Orient.

“The Bible declares that there were three gifts and mentions nothing about how many wise men there were,” Croteau said. “There was more than one, but possibly up to 15 or 20. We simply don’t know.”

The biblical Christmas story is just one part of Croteau’s new book “Urban Legends of the New Testament: 40 Common Misconceptions.”