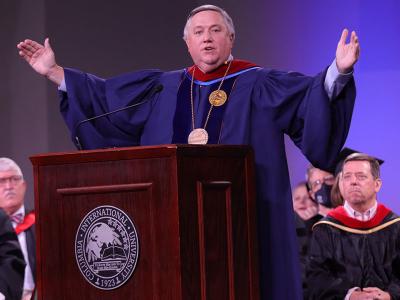 As the clear long note of the Shofar echoed across Shortess Chapel, sounded by Old Testament Professor Dr. John Crutchfield, students took their seats and quieted down for the annual Columbia International University Opening Convocation signaling the start of a new school year.

As the worship resonated from the mouths of the hundreds of students gathered, the faculty and staff took their seats behind the podium dressed in academic regalia. Professor Dr. Andre Rogers prayed over the upcoming year, and was followed by a video reviewing the successes of the previous one.

President Dr. Mark Smith approached the podium and informed the student body of the theme for the year, “Declare the Word” with a challenge to “Embrace the Word: The Truth, The Transformation, and The Training.”

“We desperately want to commit to you the authentic power of Jesus Christ,” Smith said.

He pointed students toward the theme verse, 2 Timothy 3:14-17, which tells believers to use what they have learned in the Scriptures and to strive to know God and to make Him known.

As CIU approaches its 100th anniversary in two years, Smith went on to expound on how 95 years ago, the CIU Board of Trustees strived to develop Christian leaders to engage in their culture and to exemplify what it means to live like Christ. He noted that back then, just as today, the culture casts doubt on the Word of God.

In addressing human sexuality, Smith said that CIU holds that marriage is between one man and one woman as described in Genesis 1:27. He acknowledged that this biblical truth may bump against what the students experience in the culture, but he asked them to turn to God and His Word and follow Him.

He asked one simple question designed to resonate with students in the school year ahead: “Will you accept the authority of God’s Word on your life?”

Listen to the Opening Convocation message at podcast.ciu.edu.