Love for the Long Haul 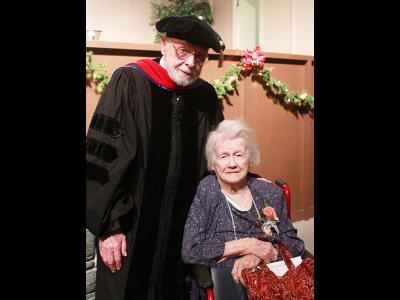 Will and Colene Norton are news. That's because they've been married for 73 years.

The couple met at Columba International University (then Columbia Bible College) in 1936. After graduating from CIU and getting married in 1939, they began a long career together of taking the gospel to the ends of the earth.

At CIU's December commencement in 2012, Will Norton was awarded an honorary Doctor of Divinity degree for his ministry in the Belgian Congo and Nigeria where he founded a seminary and Bible institute. Dr. Norton was also instrumental in the founding of the triennial Urbana Missionary Conference that challenges thousands of young people to enter missionary service.

But it's the secret to the Nortons seven-plus decades of marriage that caught the attention of "World" magazine recently. Get the details at the "World" magazine website: https://wng.org/2013/02/love_for_the_long_haul?