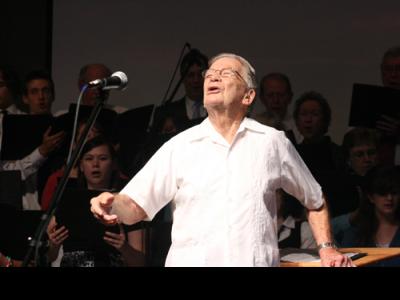 Bill Supplee in 2010 leading a CIU homecoming Chapel, the year he and his wife Joyce were named honorary alumni.

Supplee was born on July 9, 1924, in Assam, India, to George Washington Supplee and Ruth Lamberton Supplee. He graduated from Woodstock High School in India, Wheaton College and American Conservatory in Chicago with degrees in music. Supplee served in the U.S. Navy during World War II as a musician and machine gunner. He married Joyce Tucker in 1949, and then moved to Columbia to become CIU’s (then Columbia Bible College) director of music and director of the Ambassador Choir for the next 40 years.

Referring to his career, Supplee said, “My passion is for people to worship the Lord in their own verbal and musical language. Jesus spoke the language of the people.”

Supplee enjoyed cycling and after retiring from teaching became an active community volunteer and an avid gardener. A member of the Mid Carolina Camelia Society, his blooms won many awards. Supplee and his wife volunteered for many years with international students at University of South Carolina and instilled Christ’s love for the whole world in their children, each of whom is now involved in some form of international ministry. Bill Supplee often played the piano at Kershaw Health Karesh Wing and other ministries in Camden until a few days before his death.