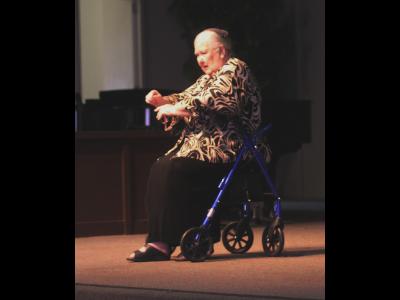 Former Columbia International University student Sue Thomas says that when it comes to the joys and pains of life, she has “seen it all.” Thomas lost her hearing at 18 months old. But as an adult, her ability to read lips made her a valuable agent with the FBI, and the basis for the action TV series “Sue Thomas: F.B.EYE.”  She returned to CIU on March 4, encouraging students to know God deeply, to surrender to him fully, and to worship Him wholeheartedly.

However, Thomas’s spiritual journey was not an easy one.  Just as she spent years learning to read lips and to speak, she went on a journey to challenge God.

“Thirty years ago, I left a glamorous job at the FBI to find God to make Him confess He made a mistake,” she said in a Chapel message. That’s when she enrolled in a graduate program at Columbia Bible College and Seminary, now CIU, and became the one doing the confessing — confessing Jesus as Lord.

“I gained my salvation at Columbia Bible College,” Thomas said.

After her conversion, Thomas went on to have an active public speaking ministry.

“I asked God then [to] send me to every nation and every generation so I can proclaim the truth,” Thomas said.  Shortly after, the show “Sue Thomas: F.B.EYE” was developed, which has aired in 64 countries — opening up the opportunity for more speaking engagements — an answer to Thomas’ prayer that she reach the nations with the truth of Christ.

Even though she was diagnosed with multiple sclerosis (MS) in 2001, Thomas continues to be active in ministry, spreading the love of Christ wherever she goes.

“I have seen it all, and I can testify as one who is getting older and older that it gets better and better,” Thomas said.  “Why is that? Because we are walking closer and closer to [God].”

Thomas encouraged CIU students to seek God through music and worship, which — even though she’s deaf — are comforting to her, as she feels the vibrations of the music.

“God has created the music in every one of us, whether we’re deaf or hearing,” Thomas said.  “Never be afraid to sing adoration and praise to the Creator.”