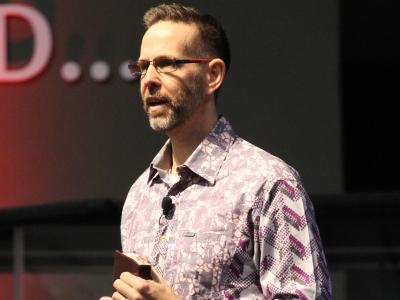 Dr. Jerry Ireland, a missionary to Africa, was the featured speaker at World Christian Week. (Photos by Kierston Smith)

Columbia International University celebrated its core value of World Evangelization during the annual student-led World Christian Week. The student body heard professor and missionary Dr. Jerry Ireland speak daily on “Compassion in Missions,” as each day offered the opportunity to engage with the global mission of God through conversation, ethnic worship, prayer and an international festival.

“My goal is that we would have more than good intentions,” Ireland preached. “Compassion is a call of the church but doing this in poverty-stricken areas without doing damage is a difficult thing.”

Ireland, a former atheist and drug addict, is an associate professor of Compassion in Missions at Evangel University. He has also served as a missionary to Sub-Saharan Africa for 12 years. The students embraced his message.

“The speaker has been phenomenal,” said Emily Floro, a senior.

Praying for “Compassion in Discipleship” was the emphasis the final day of World Christian Week — a CIU Prayer Day. The day included five student testimonies and a message on idols in missions from Intercultural Studies Professor Dr. Trevor Castor.

The week concluded with the Fisher Festival — an international fair held in the Fisher classroom building. Decorations in each room represented a nation of the world, as hosts dressed in native clothing offered samples of local food and music, and listed prayer requests for each nation.

“It has been amazing to engage others and share culture,” said graduate student Berther Ondiek who was hosting the Kenyan room. “We are one in spirit. There’s a joy in sharing and fellowship.”

Throughout the week, the student center was an array of flags and decorations as representatives from missions organizations were available to share stories and connect with students.

On Wednesday night, The Quad glowed with lights and good conversation over s’mores.

“My favorite part of World Christian Week is meeting mission reps, and seeing what’s going on around the world and how God is working,” said Senior Hannah Berglund.

“I’m here to see if I can infect people with the mission’s virus. I want to help them see where Christ would lead them,” Wells added.

Each day, students led worship in a different language.

“I love worshiping in different languages and being reminded that Christ crosses all boundaries and barriers,” graduate student Hannah Schultz said.

Students were encouraged to see more of God’s heart.

“We just cannot keep putting off the things that God is calling us to do,” said Ireland, the week’s featured speaker. “Missional stewardships flow from one thing above all else. It flows from a relationship with the Creator of the universe. The more we know God, the more we cultivate the deep longing for the things of God.”

Listen to the messages from World Christian Week on CIU’s podcasts.