Students milled about The Quad underneath the warm glow of the setting sun. They gathered for the House Summit, the year-end party where students celebrate the accomplishments of their respective residence halls.

The warm night air was pleasantly filled with banter and discussions over how the end of the semester was going as the men’s and women’s residence directors took to the microphone to announce the winners of the CIU House Cup.

The trophy is bestowed on the residence hall that has accumulated the most points at the end of the school year through various competitions and achievements called the House Collective.

One by one, the various house standings were counted down, starting from seventh place and leading up to first.

The winner: The House of Aequitas, one of the newer residence halls. The House will have the traditional honor of having a set of golden laurels placed around its crest on the front of their building for the duration of the next school year.

But beyond the competition, The House Summit served to encourage and inspire the student body by bringing together all of the hall cultures onto one green lawn for a night of fun and community.

As he reflected on is role as a resident assistant (RA), Juliano Maglio said his favorite thing about being an RA was fostering good relationships with the guys in his hall

“I really enjoyed trying to be a role model to them,” Maglio said. “That was the biggest thing for me, to do that for the guys.”

Christian Life Coordinator Joseph Brinkley said that his favorite part about the school year “was being able to connect people with people in the hall.”

“I enjoyed being able to just love on them and be real with them,” Brinkley added. 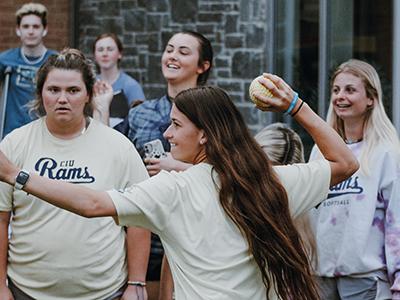