A coalition of adventurous Columbia International University hikers followed the lead of their guide, CIU Ph.D. student Tom Mullikin, for a beautiful four-mile hike of the Peak to Prosperity Passage, a portion of the Palmetto Trial that crosses the state of South Carolina from the mountains to the sea. CIU was a special guest on the hike, held in conjunction with the CAROLINA 7 expedition, so-named for the seven geographic wonders unique to the Palmetto State and bringing attention to natural marvels that need protection.

Mullikin is an adventurer and former U.S Army JAG officer who received certification as an Army Master Fitness Trainer, leading members of the U.S. armed forces and veterans of the U.S. Army Special Forces community on expeditions around the world.

The CIU group included staff, faculty and students who joined a larger group of outdoor enthusiasts. Just before leaving out on the trail, CIU chaplaincy professor, Dr. Mike Langston, encouraged the group of 50 with a devotional from God’s Word.

One of the CIU hikers was Associate Dean for Spiritual Formation, Dan Coy, who reports that the group had a great time.

“We kept a fast pace stopping once briefly by a rushing stream to sing ‘How Great Thou Art’ for a video that aired on a local morning news show,” Coy said. “There were prestigious retired military leaders that were hiking with the group who had helped build this portion of the beautiful trail.”

The hike included the crossing of an historic railroad trestle over the Broad River.

Coy noted that “the view from the 1,100-foot-long bridge was spectacular and we saw many huge fish and a group of large turtles in the water below,” adding that he learned “an earlier bridge was intentionally burned by Confederate troops during the Civil War to slow the advance of General Sherman’s troops.”

Coy says trail conversations ranged from “are we there yet?” from the little hikers, to parents asking questions about CIU as a possible choice for their children’s educational future.

“The consensus was that it was time well spent and many asked about joining Tom on the trail again as I’m sure we will,” added Coy. 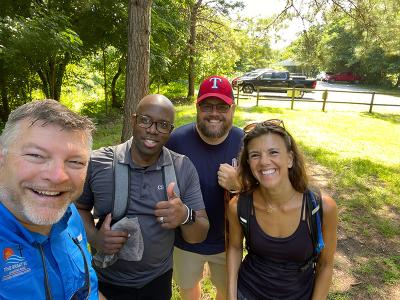