When Steve Thompson arrived on the Columbia International University campus in the mid-1970s, a female seminary classmate named Cindy Reisman took note of his cowboy boots and the guitar hung over this shoulder. He was the talk of the campus.

He looked like Robert Redford,” Cindy says comparing him to the Hollywood heartthrob of that era. “And my idea was, if a guy has that much attention, he doesn’t need mine.”

But over time, Cindy saw that Steve was devoted to prayer and to God’s Word. “One of my prayers had been that God would give me a husband that loved the Lord as enthusiastically as my dad had,” Cindy says. And she saw that in Steve. When they got engaged several months later, Steve quoted the whole book of Galatians to Cindy as an engagement gift.

Now, after 35 years of ministry together, Steve and Cindy Thompson are looking back at how their journey serves as an encouragement of God’s faithfulness. Much of their ministry was in Italy through the mission organization TEAM where they established a radio station, planted two small churches, and developed discipleship relationships around meals in their home where they hosted over 1,700 people per year.

Get the full story on the Thompson’s ministry in the TEAM article, “On the Same Wavelength: Meet the Thompsons.” Plus, click on their video, “Celebrating 35 Years of Faithful Ministry in Italy.”

Where will a degree from Columbia Biblical Seminary take you? CIU consistently ranks among the Top Regional Universities in the South by U.S. News & World Report, as well as a Best Value Regional University in the South. Apply now or request information on enrollment by contacting Admissions at (803) 807-5024 or admissions@ciu.edu. 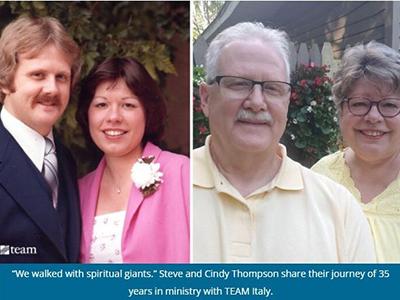 Then and Now: Steve and Cindy Thompson (Photos provided)