Black History Month underway with a challenge: “Do Hard Things” 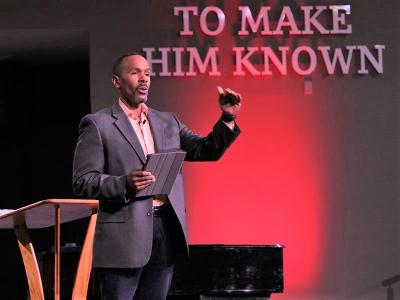 The commemoration of Black History month is underway at Columbia International University with a challenge from a state denominational leader to “Do Hard Things.”

Pastor Alex Sanders, the first African-American to serve as president of the South Carolina Baptist Convention, challenged students to go beyond their limits even when they face opposition.

Sanders, who is the pastor of Kingdom Life Church in Simpsonville, South Carolina, discussed the intense opposition that Paul and Barnabus experienced in their first missionary journey in Acts 14.

“Intentionally, as a result of the opposition, they pushed harder,” Sanders said.

Sanders related their experience to the experiences of the George Liele who he described as America’s first missionary. As a freed slave in 1775, Liele first preached in slave quarters of plantations around Savannah, Georgia. But after his former master died, the master’s heirs attempted to re-enslave Liele and was put in jail until he produced documents that ensured his freedom. He soon left the United States for Jamaica where he planted a church and held baptisms every three months. But even there his ministry was opposed and he again was thrown into prison. Despite the hostilities his ministry grew.

“What will enable us to do whatever God calls us to do, is love,” Sanders said. “It’s not energy or strength or anything else. It’s a passion and commitment to those He calls us to serve.”

Hear the message from Pastor Alex Sanders on CIU's podcast page or see the video on CIU's YouTube channel.