CIU Library Begins to Pick up the Pieces after Fire 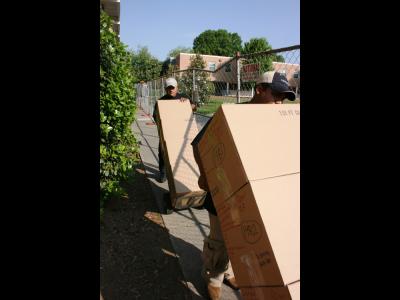 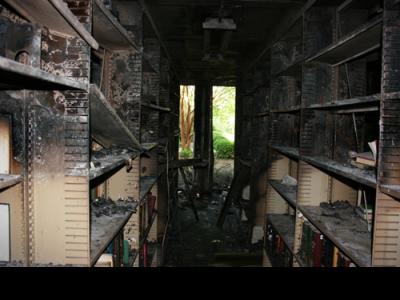 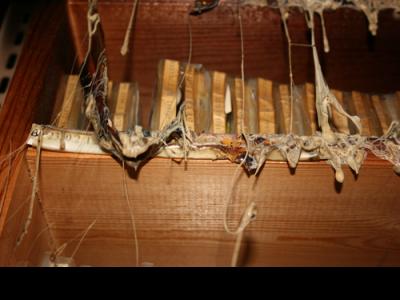 Boxes. Stacks and stacks of boxes. Inside of each carefully-labeled box carted out of the smoke-scented G. Allen Fleece Library are survivors. They are the books that didn't burn in the May 8 fire that heavily damaged the Bible, Bible commentary and theology section of the library.

The books were taken away in waiting tractor-trailer trucks by the Blackmon Mooring company of Suwanee, Ga. and hauled to Atlanta and Dallas where the books are being treated for odor and water damage. Each box is labeled with the category of book that is inside, the row it was in, and what floor it was on.

As Blackmon Mooring spokesman John Dorn was directing workers rolling the boxes out the door of the library on dollies and to the trucks, he explained what will happen to the books once they reach their destination.

"They will be put in an ozone layer to be deodorized," Dorn said. "Once they are deodorized, they'll be packed up, put on pallets and readied to be brought back here to the library."

Dorn says the books that are still wet from water damage will go through a freeze-dry process that keeps ink from running.

"And if it is wet, it will stop any microbial growth," Dorn added.

Blackmon Mooring has quite a bit of experience cleaning up libraries. Dorn says in 2006, the company loaded 17 semis with books from the University of New Mexico library after a fire there did $17 million in damages.

The fire at the CIU library was caused by an electrical problem in a florescent ceiling light. No one was injured in the fire that broke out about 6 a.m. It came as students were preparing for finals week. Other local libraries offered their services to the CIU students, including the Lutheran Seminary and the University of South Carolina. The initial damage estimate the day of the fire was $1.5 million. But at the CIU graduation exercises a week after the fire, CIU President Bill Jones announced the official damage toll at $2.5 million, which is covered by insurance. Jones also said instead of just restoring the library, CIU will begin a $2 million renovation of the library.

Meanwhile, glass and plaster crunch underfoot as clean-up workers and CIU staff members make their way through the darkness of the library with only natural light shining through the smoke-stained windows and flashlights to guide the way.

While much of the major damage was to the theology section of the library, there is also extensive damage to audio tapes that included chapel messages. The plastic covers of the tapes melted and dripped off the shelves in the intense heat.

CIU Library Director Jo Ann Rhodes is hoping the library will be back to normal by the fall semester, but no official target date has been set.

No donations of books are being accepted at this time because the library does not have a climate-controlled space to store them. Plus the library is still in the process of determining what has been lost from its collection. Bob Kallgren, CIU vice president for institutional effectiveness says that when actual losses are evaluated, the library will better know what it needs.

"We are deeply touched by the hundreds of offers of donations and other assistance," Kallgren said.

"We will make an announcement when we are able to process offers of donations in the future."

In the meantime, monetary donations designated "Library Restoration" are being accepted.

To view more photos of the fire and its aftermath see the CIU Flickr site: