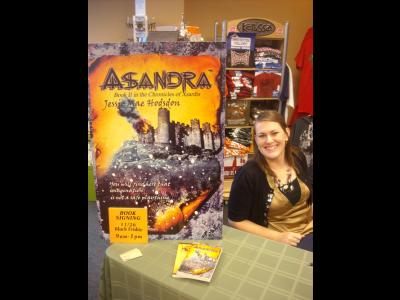 Things for a college student to do over Thanksgiving break: Eat turkey, hug grandma, catch up on sleep, and oh yes - hold a book signing.

Jessie Mae Hodsdon, an 18-year-old CIU freshman, is studying Bible and business. But she is also an author and a publisher. As a matter of fact, she unveiled her second novel in her hometown of Bangor, Maine over Thanksgiving break with a book signing.

"Asandra" is the second book in Hodsdon's "Chronicles of Xsardis" Christian teen fantasy series, published on her own Rebirth Publishing label.

Hodsdon told the Bangor Daily News that she decided to become an author after attending a series of young writers' workshops at the Bangor Public Library. She started writing every day at age 14, which is also when she began the "Xsardis" stories. Hodsdon self-published her first book "Issym," which came out last November.

"I did some research into what publishing companies were out there, and discovered there was a lot of trash being published [for teen readers]," Hodsdon told the newspaper. "So we decided to start a publishing company and use my own work to get it going."

The series is about a couple of teenagers who get caught up in an imaginary world of dragons, fairies and a villain named Sasha.

Hodsdon is working on the next book in the "Xsardis" series and a science-fiction series as well.