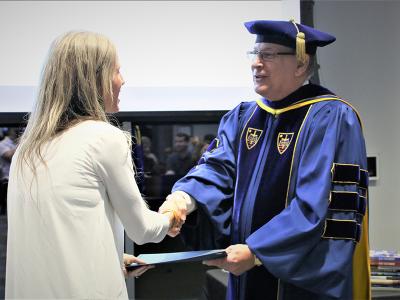 The program is led by Carol Kirkland who thanked the CIU administration for the opportunity to reach out to women in the churches and the community and “create this teaching platform where we have solid biblical content along with spiritual leadership lessons.”

Addressing the women at the ceremony in the new Jones Center, CIU Provost Dr. James Lanpher noted the importance of women throughout the Bible, including those around Jesus during His time on earth.

Lanpher cited examples of biblical women who displayed leadership, including Junia, mentioned in Romans 16:7 as “great among the apostles.” He also noted that CIU itself wouldn’t exist if it weren’t for the prayers of the six “praying ladies,” women who were compelled to pray for a Bible school in Columbia almost 100 years ago.

Among those who completed the course was Tammy Napolitano, who said the class showed her healing in areas she didn’t even know she needed.

“I am a leader, and it’s helping me be a better biblical leader,” Napolitano said

As Annett Halter posed for celebratory photos with loved ones, she called the class “a phenomenal experience” for her spiritual walk.

“I learned things about the Word that I never knew,” Halter said.

One assignment the women had was to construct a timeline of their lives, highlighting their strongest and weakest moments in their spiritual life.

“It was a life-altering experience with the timeline,” Halter added as she also offered her thanks to CIU for making the program possible.