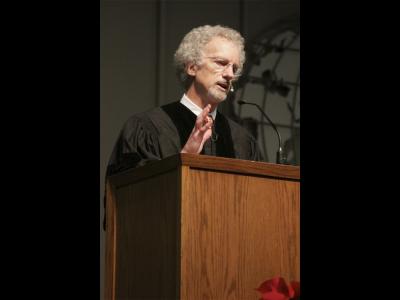 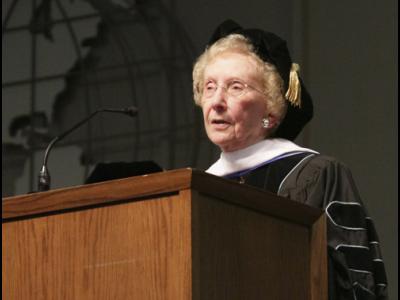 Best-selling Christian author Philip Yancey and Lexington, S.C. businesswoman Elizabeth Rickard Sessions received The Doctor of Humane Letters at the December commencement exercises of Columbia International University. Both are alumni of CIU. Yancey also gave the charge to the graduates at the Dec. 17 ceremony. The Doctor of Humane Letters is awarded to those who have distinguished themselves in Christian living and service.

Philip Yancey is the author of 20 books that explore the questions faced by most Christians and include "Where Is God When It Hurts," "Disappointment with God," and "Prayer: Does It Make Any Difference?" He drew heavily from his CIU background in developing "The Student Bible," a best-selling edition of the Bible with study notes. Yancey's books have won 13 Gold Medallion Awards from the Evangelical Christian Publishers Association, and have sold more than 15 million copies.

Yancey's work has appeared in "Reader's Digest," "Publisher's Weekly," "National Wildlife," and "The Christian Century." For many years he wrote a monthly column for "Christianity Today" magazine, which he still serves as editor at large. Today Yancey and his wife Janet travel around the world supporting the missionary work of Philip's books, which have been translated into 35 languages.

Elizabeth Rickard Sessions is a lifelong resident of Lexington County, S.C. near Columbia. Trained as a Bible teacher, Sessions joined in her mother's vision to minister to the elderly and less fortunate. In 1948, Rickard Nursing Homes was founded in Lexington County where Sessions served for 28 years as an administrator providing for the physical and spiritual needs of thousands of patients. She also led daily devotions for the residents and played the piano so they could join her in singing hymns.

Sessions is an active member of Lexington Baptist Church where she sings in the choir and teaches Sunday school. She mentors youth in the Lexington Alternative School and has served as chaplain to the women in the Lexington County Detention Center for over 26 years.

Dr. Bill Jones, president of Columbia International University says it's an honor to recognize these two CIU alumni with the Doctor of Humane Letters. "They have uniquely distinguished themselves in their spear of influence," Jones said.

In his charge to the graduates, Yancey encouraged them to leave CIU with an attitude of humility, something he says he didn't do 40 years prior when he graduated from CIU, then called Columbia Bible College.

"I had to come to terms with pride, and learn humility, which is a necessary prerequisite for grace," Yancey said.

Yancey said there needs to be a balance between zeal for the Lord and knowledge. He said during his CIU days, he thought there was too much zeal, and not enough emphasis on knowledge - something he resented. But he said when he looks back at his time at CIU; it's the zeal he appreciates most.

"Maybe you're like me, when I was sitting in your seat - I thought I knew everything - maybe you think you know everything," Yancey said.

"Maybe you, like me, will have the ship of your confidence crash on the rocks of reality. I hope not. I hope that you and this school will set a shining example of ... that rare balance between zeal and knowledge," he concluded.

Upon receiving her honorary doctorate, Elizabeth Sessions noted that she has had a 70-year relationship with CIU.

"I've known all six presidents. What a privilege," She said.

"When I began as a student here about 70 years ago, my eyes and my heart were open to the Word of God. Those years of study became the foundation for the rest of my life," Sessions said.