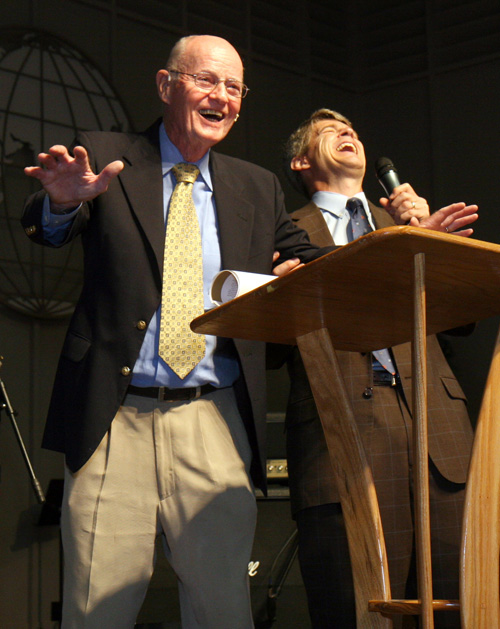 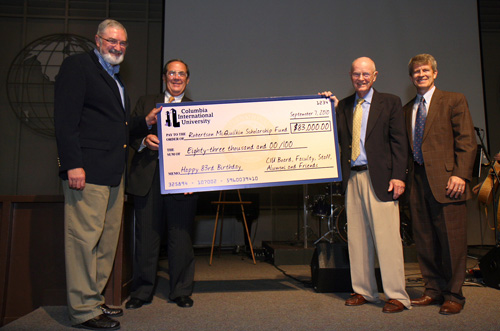 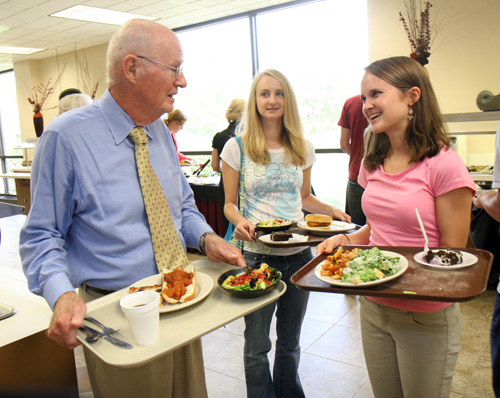 (Click image to view a larger version)
McQuilkin (second from right), is presented with an oversized check for $83,000 by (left to right)Alumni Ministries Director Roy King, CIU Vice President Keith Marion, and CIU President Bill Jones. Over $109,000 was actually raised.

Columbia International University President Emeritus Robertson McQuilkin was presented with a big surprise on his 83rd birthday. The student body, faculty and staff sang "Happy Birthday" to him at the beginning of the chapel service Sept. 7 - his birthday, a day he was the scheduled chapel speaker. But the birthday song wasn't the BIG surprise.

After McQuilkin's message, CIU President Dr. Bill Jones took the stage with McQuilkin to make a special presentation. He explained that at the beginning of August, CIU Development Director Frank Bedell had an idea. It was to ask CIU alumni, friends, faculty and staff to donate $83 toward CIU scholarships, in honor of McQuilkin's birthday, with a goal of $83,000 by Sept. 7.

"Sorry I'm not 110," McQuilkin deadpanned as an oversized CIU check for $83,000 was presented to him. The chapel assembly roared with laughter at his dry humor.

But Jones continued: "We were not able to raise $83,000. We raised much more than that. As of this morning we raised $98,000," Jones said as the students shouted and applauded.

McQuilkin was also presented with a proclamation that included the names of 300 people who donated toward the scholarships, some of whom were on hand and shared a huge birthday cake with him and the student body in the dining hall after chapel.