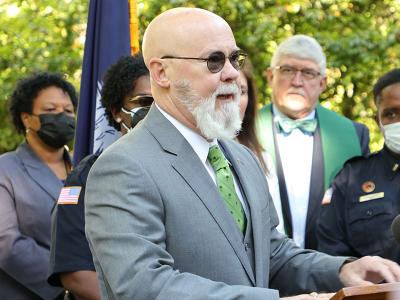 Columbia International University doctoral student Tom Mullikin is developing what he calls “a theology of ecology.” His concern for God’s creation led him to conceive and direct POWERPLANTSC, designed to raise awareness about the importance of trees to human and environmental health, not the least of which is the mitigation of disastrous flooding.

“We’ve seen the Lord’s hand in all of this, and it has been a tremendous blessing to work with so many wonderful people,” Mullikin said. “What you see coming together is the nexus of the strong economy and a strong ecology.”

After the event, Mullikin, who is enrolled in CIU’s Ph.D. in Organizational Leadership program, said he has “learned so much about the theology of ecology” in his studies, adding that Evangelicals have largely been left out of the ecology discussion.

The ceremony opened with prayer by CIU President Dr. Mark Smith and included CIU Chaplaincy Professor Dr. Mike Langston delivering the “blessing to the trees” with prayer as he symbolically sprinkled water over a new tree being planted in the Governor’s Mansion garden.

CIU is a SCPOWERPLANTS partner.

See more on the event from WACH Fox 57 and WIS News 10. And here is a follow-up article in the Cayce/West Columbia News.