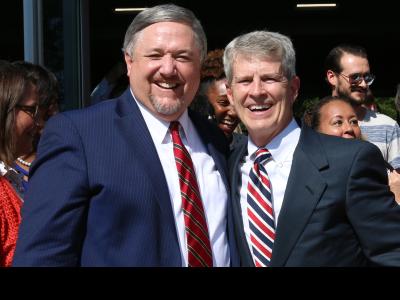 By Naomi Balk and Bob Holmes

Over 200 guests and VIPs came together to celebrate the dedication of the William H. Jones Global Business & IT Center with a ribbon-cutting ceremony and a luncheon. Built to train ministering professionals to impact nations with the message of Christ, the $20 million, 44,000 square-foot building was named in honor of CIU’s sixth president who currently serves as chancellor and whose life has been dedicated to spreading the message of Christ.

“This is Dr. Bill Jones’ day where we honor him for the many lives that have been impacted and his role in getting us to where we are as a community,” said CIU President, Dr. Mark Smith during the ceremony. “I think that it’s important to put our spiritual mission to work in practical ways by investing in Monticello Road and the surrounding communities.”

Built at the entrance to the CIU campus, the Center is a vessel ready to pour into the community, assisting in economic development along the Monticello Road corridor.

Richland County Council Chairman Paul Livingston called it a great day for CIU and the community.

“Every conversation we had with CIU has also included a conversation about our community and that says a whole lot about CIU,” Livingstone told the crowd gathered in the Jones Center.

“CIU does an excellent Job reaching out to the community,” Davis said, “Economically, this (Center) will help to increase business development and offer resources.”

“They have involved the folks in the Midlands and around the state in the conversation and decisions that they made for the programs,” Huggins said. “[They’ve been asking] what the employers are looking for and recognizing that from the start.”

It was under Jones' presidency that CIU first started a business course, then a business minor, then CIU’s fastest growing major. Today, there is a School of Business & Professional Studies headquartered in the Jones Center.

CIU Board of Trustees member Adrian Despres calls Jones “a master organizer always envisioning the next thing happening,” adding, “This is his vision: He wants to win the world for Christ. And that is what this building is all about.”

After many people and organizations were recognized for their part in the building of the Jones Center, its namesake was surprised with a very special honor from the South Carolina Governor’s Office: The Order of the Palmetto, the state’s highest civilian honor awarded to citizens of South Carolina for extraordinary lifetime service and achievements of national or statewide significance.

Jones facial expression was that of shock when the presentation was made.

“I feel like I should not receive the award,” Jones said. “It was truly a surprise and so humbling.”

After the festivities, Jones explained his vision for the business program as a training ground for CIU students who may not be called to be “professional ministers,” such as pastors and traditional missionaries, but “ministering professionals.”

“These are people who are being trained in the same way about Scripture and inner character so that they can create a positive godly influence [in the marketplace],” Jones said. “Right now, I am pouring my life into 14 key businessmen downtown. Here’s how we say it: we want to transform the spiritual landscape of Columbia. It’s exciting, and this [Business Center] will be the epicenter.”

More coverage of the event is available from Cola Daily and the Columbia Regional Business Report.