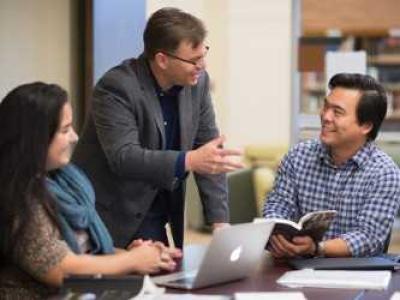 As a teacher, Dr. Ed Smither, dean of the Columbia International University College of Intercultural Studies, loves coming alongside students and helping them discover their place in the mission of God. Now, he has written a book that will assist students in their study of those who have come before them in the mission.

“Christian Mission: A Concise, Global History,” has just been released by Lexham Press.

In this one-volume textbook, Smither weaves together a comprehensive history of Christian mission, from the apostles to the modern church. In each era, he focuses on the people sent by God to the ends of the earth, while also describing the cultural context they encountered. Smither highlights the continuity and development across thousands of years of global mission.

Smither discusses the book in this Q&A:

In what way is your book unique from other textbooks written on the history of missions?

Is the history laid out in chronological order in your book?

Yes, have a look at the table of contents here:

Is there a common thread running through the periods of missions history?

Yes, while there have been centers for the global church in every period, we see that the gospel has consistently gone from everywhere to everyone. Irish monks spread the gospel through Europe while Syrian and Persian monks were doing the same across Central Asia and China.

How do you approach the cultural changes that each generation of missionaries encounter?

Each chapter begins with some general backgrounds on history, culture, and politics to situate the mission story. We aim to tell an honest story. Some missionaries did not do a great job of learning languages and cultures, while others (Jesuits in Asia, German Pietists in India) did a great job of it.

What do you hope readers come away with?

An honest grasp of missionaries in Christian history — their sacrifices, mistakes and ordinary faith.

What else would you like for us to know?

An honest study of mission history reminds us that God is a missionary God, and the work of global mission is accomplished in the Spirit’s power.

Discover your place in the mission of God. Learn more about CIU’s undergraduate and graduate Intercultural Studies programs.