CIU students ready to make an impact in government 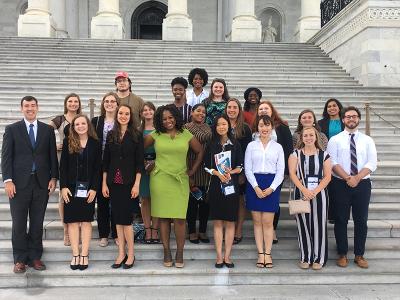 Trip to D.C. includes address from the president and vice president

Nearly 50 Columbia International University students learned to make an impact in the Nation’s Capital, as well as at home at the Faith and Freedom Coalition’s Road to Majority Conference in Washington, D.C. June 27-29.

The students heard from the nation’s top government leaders including President Donald Trump, Vice President Mike Pence, and a number of senators, congressional representatives and cabinet members. They also attended breakout sessions featuring panelists who discussed how to engage the culture and political process.

“It was a great networking opportunity to meet new people from different backgrounds, states, businesses, and political positions who are impacting the kingdom of God in whichever arena they are in,” said rising junior Joy Jones.

After the conference, graduate student Christina Alexander said she was still “trying to process everything” and called it “an amazing opportunity to have attended.” Each student attended at no cost through a scholarship provided by the Faith and Freedom Coalition.

Alexander was especially excited to hear Vice President Pence address the conference, noting that his speech was filled with emotion.

“(He) even thanked the people for allowing him to be the people’s vice president and serve the nation and people of America,” Alexander said.

CIU international student Tryphene Dewanou, who is from the African nation of Benin, called the experience “awesome” and “an honor.” She echoed a familiar theme among others who attended that they need to more carefully scrutinize what is reported by the news media.

“I learned a lot about the Christian’s role in politics and how to be mindful and willing to do the research before believing anything from the news,” Dewanou said.

As a part of their trip package, the CIU students also received free admission to the new Museum of the Bible in Washington.