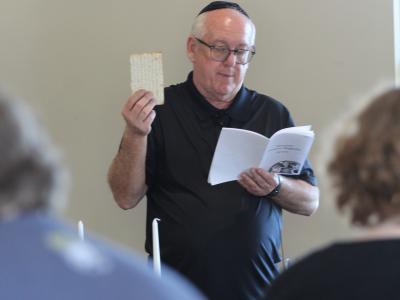 Columbia International University students remembered God’s faithfulness to His promises and the truth of redemption from sins by participating in a Holy Week Messianic Passover Seder Meal.

Passover was a celebratory meal commanded by God in Exodus 12, yet it still holds significant power to usher in a worshipful heart posture for the Christian.

This meal was rich with symbolism because each element reminded the partakers of Old Testament Israel’s bondage to Egypt and God’s deliverance. As a Messianic celebration, each of these symbols also represented elements of how God delivers the believer from sin bondage and to redemption in Christ Jesus. The celebration consisted of people eating together and reciting a script and Scripture.

The elements of the, parsley, bitter herbs, salt water, horseradish, charoset, hard-boiled egg, shank bone, and the four cups of drink all represented parts of the story of redemption, including the hiding of matzah.

“I never thought [of the symbol of hiding the matza but] it points to Jesus and his resurrection,” said CIU Assistant Professor of Ministry Care Dr. Steven Johnson who helped preside over the Seder. He offered insight as a former Jew.

The event was hosted by Eto Beta Rho, the National Scholastic Honor Society for Students of Hebrew Language and Culture, which is led at CIU by Dr. Benjamin Noonan, professor of Old Testament and Hebrew.

“I like the community element and how it brings us all together to celebrate and remember,” Noonan said. “We can learn a lot from Jewish traditions.”

The meal was a first for student Wade Holmes who said, “I really liked how the Old Testament and the feasts of the Israelites point to the Messiah.”

A traditional announcement ended the Seder Passover celebration: “Next year in Jerusalem!”  Or as Johnson said later, “Next year at CIU.”