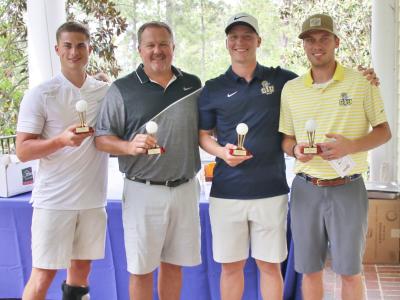 As Columbia International University President Dr. Mark Smith finished an opening prayer at the second annual CIU Golf Classic, the cheer of “Hip, Hip Hurray” echoed across the assembly of golfers at the Woodcreek Golf Club near Columbia.

The shout came from longtime and popular local television personality Joe Pinner as he raised his hands in enthusiastic celebration. Pinner was among 120 golfers from the Columbia area participating in the CIU athletics fundraiser May 10.

Pinner’s support of CIU goes back decades to when CIU was called Columbia Bible College and he was known as “Mr. Knozit,” the host of a weekly children’s program by the same name. He regularly featured The Puffet House Players, a puppet show produced by Muriel McQuilkin, wife of CIU’s third President Robertson McQuilkin.

“They were so great,” Pinner recalled. “They had messages about living and about getting along, and life and faith.”

Others taking time out of their busy day to play were Blythewood Mayor J. Michael Ross and former Lexington Mayor Randy Halfacre who joked about mayors who golf during the workday.

“My golf course is in dead center of town, so I’m still working,” Mayor Ross said as both mayors rolled in laughter.

As CIU Athletics Director James Whitaker surveyed the scene, he was filled with gratitude noting that the Classic raised $40,000 to be used beyond everyday budget needs, including missions efforts as the athletic teams minister through their sports, sharing the gospel at home and abroad.

“To see the support we have from the community and people excited about the event is awesome,” Whitaker said.

Columbia International University ranks #1 among colleges and universities in South Carolina by BestColleges.com. Excitement is growing on campus with CIU’s first baseball program in development and a major renovation of the CIU Dining Hall. Request information on enrollment at CIU and Columbia Biblical Seminary or call (800) 777-2227, ext. 5024.