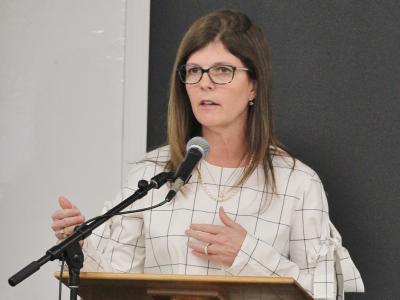 South Carolina Lt. Gov. Pamela Evette visited the Columbia International University campus to discuss criminal justice reforms in the state that are making communities safer, strengthening families and fostering second chances for offenders. She was the keynote speaker at a “Lunch and Learn” event hosted by the CIU School of Business & Professional Studies and the South Carolina Faith and Freedom Coalition.

A panel discussion followed that included Bryan Stirling, director of the South Carolina Department of Corrections. Much of the discussion surrounded a new federal law called the First Step, which stands for “Formerly Incarcerated Reenter Society Transformed Safely Transitioning Every Person.” The goal is to give inmates a chance at a shorter sentence with positive behavior and practical job training.

“There are success stories happening all around the state,” said Evette. “I want to make sure that we are getting out a positive message out to businesses and the people of South Carolina that prison reform can happen and when it does, it benefits all of us in society.”

Recognized at the event was the role of the CIU Prison Initiative in prison reform. Since inception of the Prison Initiative in 2007, 157 incarcerated men and women in South Carolina prisons have graduated from the program with accredited Associate of Arts degrees and are now serving in over 20 institutions as chaplain’s assistants.

The event attracted the attention of the Columbia media. See reports from the event produced by News 19 WLTX TV and ABC Columbia.